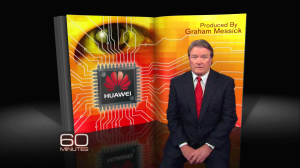 Chinese telecom giant’s pursuit of building the next generation of digital networks in the U.S. prompts outcry in Washington. Steve Kroft reports. Graham Messick is the Producer. Coleman Cowan is the Associate Producer.

If you’re concerned about the decline of American economic power and the rise of China, then there is no better case study than Huawei. Chances are you’ve never heard of this Chinese technology giant, but in the space of 25 years it’s become the largest manufacturer of telecommunications equipment in the world – everything from smartphones to switchers and routers that form the backbone of the global communications network. It’s an industry the U.S. invented and once dominated. But no more.

Now Huawei is aggressively pursuing a foothold in the United States, hoping to build the next generation of digital networks here. It’s prompted an outcry by the House Intelligence Committee that has raised concerns about national security, Chinese espionage, and Huawei’s murky connections to the Chinese government.