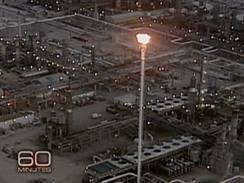 The historic swings in oil prices last year were the result of financial speculation from Wall Street and not supply and demand. Steve Kroft investigates. Leslie Cockburn is the Producer. Coleman Cowan is the Associate Producer.

About the only economic break most Americans have gotten in the last six months has been the drastic drop in the price of oil, which has fallen even more precipitously than it rose. In a year’s time, a commodity that was theoretically priced according to supply and demand, doubled from $69 a barrel to nearly $150, and then, in a period of just three months, crashed along with the stock market. So what happened? It’s a complicated question, and there are lots of theories. But many people believe it was a speculative oil bubble, not unlike the one that caused the housing crisis, and that it had more to do with traders and speculators on Wall Street than with oil company executives of sheiks in Saudi Arabia.