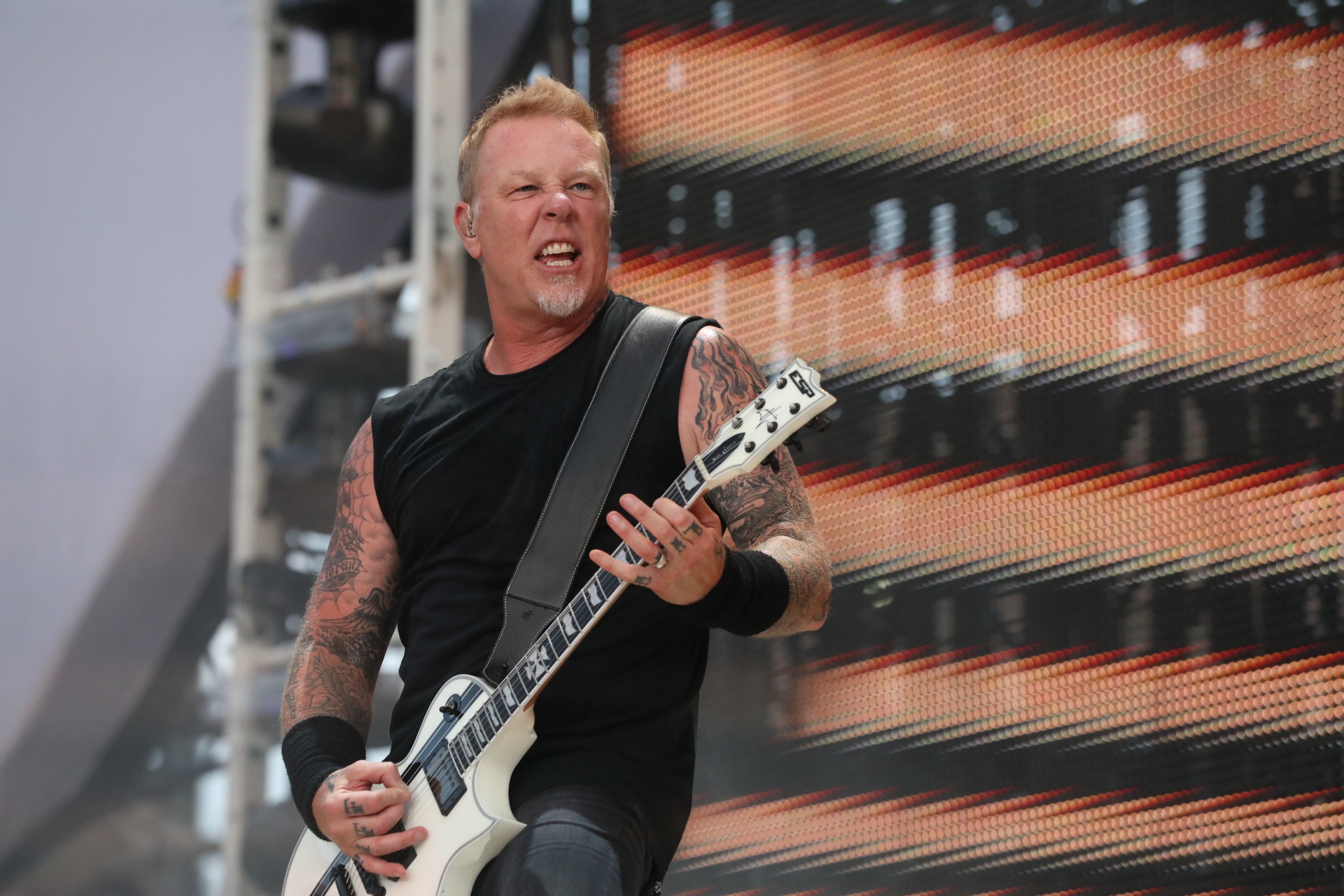 Behind the Lens: Metallica

If you could interview the members of one of your favorite bands before they played a stadium show, what would you ask them? Think about it: Their music is the soundtrack of your life, from your teenage years into adulthood. You played guitar along with every riff, every melody, and every solo of “Master of Puppets” so loudly, so many times, your neighbors were banging their heads (ah, but in frustration…). Any time you needed an extra dose of energy before a big game, a big exam, or heck, just to cut the grass, “…And Justice for All” was like a mainline of adrenaline to your soul. So what would you ask Metallica – James Hetfield, Lars Ulrich, Kirk Hammett, and Robert Trujillo – before they played Detroit’s Comerica Park, that you possibly don’t already know, and they haven’t been asked hundreds of times before? 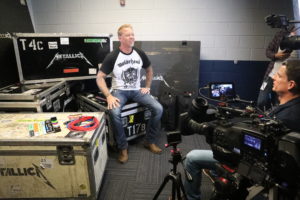 I am no longer the teenager with rock-and-roll dreams, but that experience still forms part of who I am today: Father, husband, journalist, and somewhere down the list: someone with a deep appreciation for the beautiful, violent music that is Metallica, even if I can’t explain it to my wife, who, god bless her, will sing “Hungry Like the Wolf” again and again (and not sotto voce), but doesn’t know “Fuel” from “Seek and Destroy.” I remember what it’s like to play in a band, but I’ve never had tens of thousands of people singing back to me lyrics that I wrote in a garage, or in a basement, 30 years ago.

I get that. Lars said, “Whether there’s 45,000 people, 450 people, or 4 people in your backyard, if we can find a way for the band and the audience to connect, and feel as one, then we’ve achieved our primary goal.” But how can you possibly do that in an outdoor stadium with fans packing every last corner of the upper deck? “I call it the thousand-yard stare,” Lars said. “You have to include everybody. You look out. You try to embrace. You bring people closer.”

OK. That’s some good business. But what about the music? “There’s a certain dynamic element to all the Metallica songs,” Robert said. “I like to think of it as a roller coaster ride because there are times when you’re shifting gears going into a mellow section, and all of a sudden, you transition into something really fast. But there’s always that groove factor, and that’s what separates Metallica from a lot of other metal bands is that there is a groove factor.” 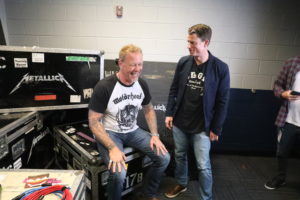 I’ll be honest: For the three decades I’ve listened to Metallica, I’ve never associated their music with the word “groove.” But it’s true. Listen to the opening riffs of “Master of Puppets”, or “Enter Sandman”, or “For Whom the Bell Tolls.” Hear the groove? I do now.

Metallica is in the middle of a year-and-a-half-long world tour covering 96 shows across the Americas, Asia, and Europe. The WorldWired Tour is the band’s first North American tour in eight years, and their first stadium tour in 20 years. It’s a massive production: The stage alone takes three days to build. But what I found more interesting than that massive stage spanning Comerica Park’s outfield, the huge video screens, and the pyrotechnics that make up Metallica’s WorldWired shows, was where each show starts: In a small room, just big enough for a drum kit, three microphones, and a couple of sound monitors. About an hour before each show, Metallica gathers in what they call the “tuning room”, somewhere deep in the bowels of the stadium, to knock the rust off and check in with each other. It is the very essence of a garage band: four guys packed into a tight space, jamming, goofing off, and mugging for their friends watching. For Metallica, this time is also used to go over some of the deep cuts that vary from show-to-show.

“We change the set list a lot,” Lars told me. “We never play the same list twice, so we’ll always warm up on a couple of the songs we haven’t played for maybe a couple of weeks.” Lars creates the set list for each show, a process that has become surprisingly scientific, he said. “I get all the statistics of every time we played in Detroit in the last 10-to-15 years. What songs did we play there of the deeper cuts? And then I make sure that we don’t play the same ones.”

One of the few songs that remain a staple of Metallica live shows is “Master of Puppets.” It is a fast, melodic, and complex nine-minute song (yes, with a groove…). There was a point in my life years ago where I would summon every ounce of dexterity and concentration to play Kirk Hammett’s guitar lines. I found it to be an impossible task, so I was surprised when he told me what sometimes happens to him on stage. “I get so wrapped up in what I’m playing and how I’m playing it – the execution of it – that oftentimes I forget the audience is out there. It’s crazy. And only sometimes over the course of a show that might happen, but I’m snapped back and I’m aware of the audience again.”

That never happened to me. But that’s why Kirk is Kirk, and I’m… well, not Kirk.

Since 1983’s “Kill ‘Em All”, Metallica has sold more albums worldwide (110 million) than there are people in Germany, France, or the United Kingdom. Since 1991, when Nielsen SoundScan began tracking album sales, only the Beatles and Garth Brooks have sold more albums in the U.S. than Metallica. Not Adele. Not Jay-Z. And not Taylor Swift. So has it all gone to their heads? Are they impossible to talk with? Not at all. For the brief time we were together, they were just normal guys, talking about what they do and why they do it. That wasn’t a question I asked, but that’s what I’ll always remember about my time backstage with Metallica.